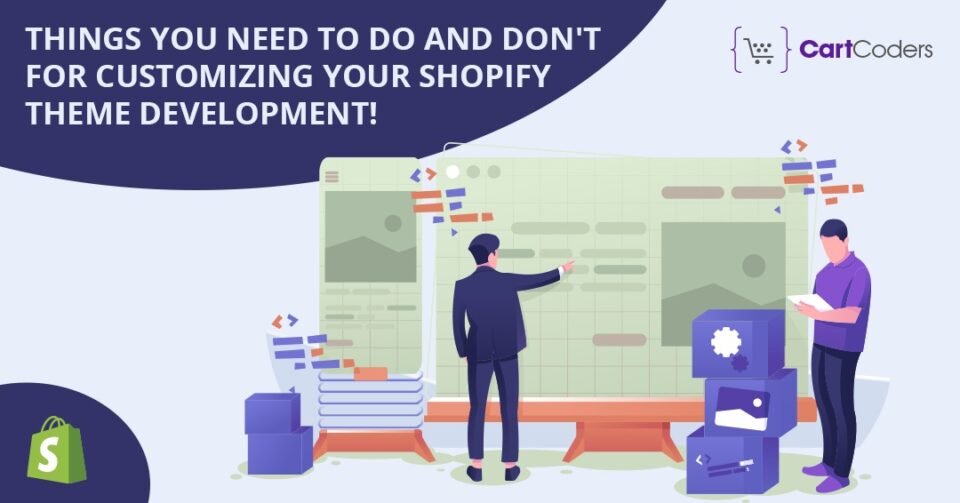 Shopify Custom Theme Setup. I hope eventually, you should have a clear idea of what it takes to make those much-desired modifications and decide

Shopify themes are great because they are very easy to install & have an e-commerce website up & running in a short period. So first let’s crack what is a theme?

Shopify theme is a template that determines what your site will look like & how it will function. However, your choice of theme depends on the branding of your business.

Now you must be thinking if there are any reasons to develop a custom Shopify theme?

Customization range in complexity. Most of us can do customization with enough time and patience, while many need a skilled professional. So, before diving into it, be aware of few things and do your own research before diving into the code. Because one wrong move can have serious implications and create a ripple effect that causes problems for your store.

In this article, we’ll go through some safeguards and pitfalls of customizing your Shopify Custom Theme Setup. I hope eventually, you should have a clear idea of what it takes to make those much-desired modifications and decide if you’re comfortable making them yourself.

Do: Keep backups of your Shopify theme on a regular basis

The Shopify admin holds a maximum of 20 themes at once. However, most of the merchants don’t use this great feature. The reason is a common misconception that having more than one published theme can be a burden to a store’s page load speed. But, believe me, it’s not. So go and start doing it now.

I know page speed is an important concern, but be aware having extra themes and theme duplicates in your store does not bother loading or raise any issue with customer experience. On the flip side, maintaining a habit of duplicate your theme before making changes can ease troubleshooting if page speed issues occur later on.

It will allow you to add detail to your themes to keep track of backups. The “Rename” feature allows up to 50 characters to provide supplementary information about the theme backup, such as date, version/release, and what customization it precedes.

For some of you, it may sound like a lot of theme versions, but don’t stress it can run out quickly if you’re making a duplicate after every font color adjustment!

Nowadays hiring freelance developers for Shopify store has become quite common, but finding a relatable and skilled developer is not that easy.

However, we have heard many stories from merchants who have been left high and dry with poor, incomplete customizations. Always hire expert developers who will provide estimates of timeframe and cost before you give them any money.

Do: Keep track of which files have been changed and update regularly.

It’s good to keep a logbook of your work. Keeping a written record of changes made to your theme may sound like a waste of time, but trust me it can be a highly valuable resource when you’re retracing your steps and trying to resolve the issue.

It’s not that difficult either. We all do this by keeping a document file with dates and notes with a who-what-where-how-when-why summary of a modification. Like we share documents through Google Docs, can be used to track changes when working in teams.

Don’t: Try to transform a camper van into a catamaran.

Through Shopify themes, you can build highly customized stores. Being a merchant you should get a sense of your theme’s makeup and limitations before committing to extensive changes.

The above details show us that custom design provides you an opportunity to create a user-centric e-commerce website. No doubt, with a custom theme, your store can achieve its goals in its way rather than fitting into the defined rules of a pre-built theme. Cartcoders is one of the best Shopify theme Development Company that creates a custom Shopify theme as per your preference.

Bring your apps to market faster with React Native!

CartCoders is the best Shopify development company and eCommerce Store development service provider. We are in the IT industry since 6+ years, We are Providing services like Shopify Development, Shopify Store Setup, Shopify Theme Setup, API integration, Theme Development and integration, Shopify Migration Service, Shopify Multivendor marketplace Services, Shopify theme conversion, theme Customization, Shopify SEO Services, total Shopify Solution available at us. We have a highly experienced team of Shopify experts working round a clock for our clients & providing all kinds of solutions and support related to the most popular web development platform Shopify.

Powerful Ways To Build A High Converting Shopify Store In 2021