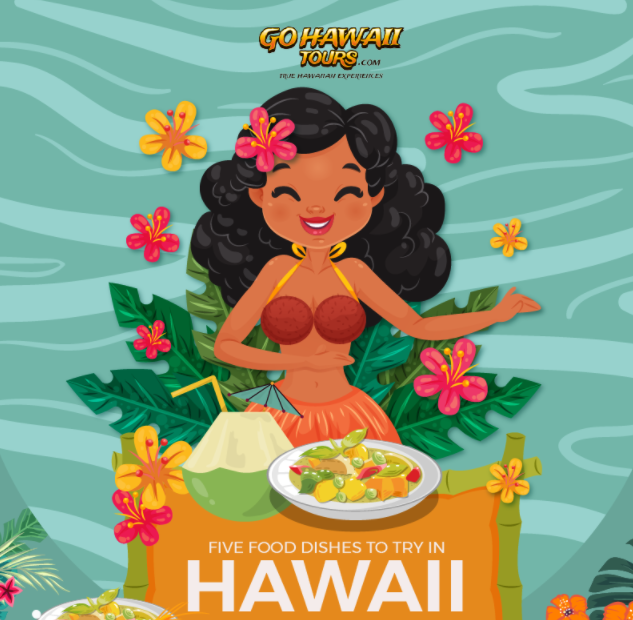 Well, their local dishes and delicacies.

Hawaiian viands will satisfy your taste buds and give you a taste of the native inhabitants’ way of living that progressed through time with the interaction of Western and Eastern cultures, producing a multitude of unique flavors.

To make your Aloha Hawaii trip memorable, these are the top five Hawaiian cuisines you shouldn’t forget to try:

Developed during Hawaii’s plantation era, saimin is one of the island’s most traditional local foods influenced by various immigrant nationalities.

At first, the recipe is primarily based on the thin Chinese egg-noodle bathing in a Japanese broth. Then, Portuguese sausage, green onions, kamaboko, and kimchi joined the mix, contributing to the savory flavor found in a bowl of the mouth-watering saimin we recognized today.

Getting a Hawaiian plate means preparing yourself to taste the authenticity of the whole island.

Expect a wholesome brunch when tasting a Hawaiin platter as it offers rice with a kalua pig on top, pork or chicken laulau (wrapped in ti leaves), pipikaula (dried beef), and lomi salmon on the side. If you want desserts, kulolo (taro and coconut cream pudding) or haupia (coconut cream pudding) are available.

Are you looking for a frozen treat to quench thirst from the heat waves? Hawaii’s iconic all-natural shave ice will save your day. Hawaiians drizzle the shaved ice with sweet syrups.

It is said that the Japanese immigrants who came to work in sugar and pineapple plantations way back 1800s are the ones that introduced the concept of shaving flakes of ice then coating it with sugar or fruit juice, or coined as “kakigori.” As time passed, it drew popularity among locals and became part of their lives.

Simplicity is beauty. That’s how you can describe the way Hawaiians prepare luau stew.

The recipe also varies as the most popular luau stew had beef brisket on it. But the original cuisine falls into the category of comfort foods.

No one could ever resist its gooey chocolate pudding filled inside with butter-based Chantilly frosting. The light, flaky Choux pastry coco puffs of Liliha Bakery will indulge your sweet tooth.

Who wouldn’t want to taste and try the chocolate cake frosting with touches of pecans, coconut, and butter? Eating one isn’t satisfying, as they said.

For more information and inquiries, call Go Hawaii by contacting 1-808-926-3090 or through our contact page.

HOW DOES THE PROCESS OF BAIL WORK IN HARRIS COUNTY?

Liquid Soap Dispensers Pune: How Do You Get the Right One

How to Settle For the Best Vietnam Travel Packages

What is the material used to create a waterproof bag? What’s the deal?