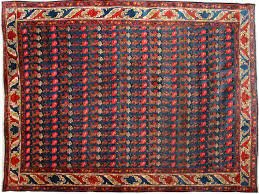 Even in times of adversity, man’s ability to invent and create is absolutely astounding; in fact, the ancient hooked rug was born from the hands of women who longed to explore beauty and made extraordinary carpets out of ordinary rags. They were mostly utilised to decorate the poor dwellings of many families with hardworking parents and several children at the period. They can now be found in even the most prestigious homes, as they represent the grassroots American people’s inventiveness, skill, and craftsmanship.

The antique hooked rug’s origins may be traced back to the early 1800s in North America, specifically Maine, where women sought to save money during hard times while also spending their limited spare time doing something helpful and beautiful. They began collecting strips of discarded rags, robust yarns, and any other textile material that seemed suitable for making a carpet that would warm the frigid floors in the winter.

The timing couldn’t be better because, by the middle of the century, several trade prohibitions had been lifted, resulting in a plethora of burlap bags being used to transport a variety of goods such as tea, corn, wheat, and coffee. This burlap material could simply be ripped into thin strips and then pushed through the back of a larger piece of burlap to create tiny loops.

There were no patterns or precise designs at first, so ladies hooked whatever they saw: animals, flowers, geometric forms, and even patriotic themes, but the end result was incredible. These improvisations swiftly evolved into a type of art, requiring only a four-board frame and a hook, which may be a bent nail, a wooden crochet, or even whale bones to penetrate the cloth and pull or push the strings.

By the turn of the century, this fledgling art appeared to have had a brief existence as factory-made carpets grew increasingly popular, but the 1920s and 1930s saw a resurrection of this folk art form. The majority of the stylish pale tones that were all the rage at the beginning of the century ended up in wonderfully crafted folk hooked carpets a few decades later. Again, the timing couldn’t have been better, as the Depression began to wreak havoc on middle-class families’ financial prospects, and these inexpensive yet lovely hooked carpets were the ideal compromise.

The antique hooked rug is today regarded as a piece of American history, and its beauty and vintage look have increased its value much beyond what its creators could have imagined. These works of art, which arose from poverty and necessity, are sold at great rates alongside other artefacts. Although time has proven that they are also resilient and sturdy, there are few possibilities that you will ever find an antique hooked rug on the floor in the twenty-first century, since their worth dictates that they be hung on the wall. If you have such masterpiece lying in attic and want to sell it visit, – Antique Folk Art for sale

Thanks for reading the article and Have a good day!

Do DJs Need Monitors When Mixing?

Antiques Roadshow – How it Works

How to Get Started with Cryptocurrency Trading in the Philippines